In this article we will consider raisin export statistics and raisin production stats, especially in two last years(2020-2021).

The top exporters of raisins are concentrated in these three countries. Iran and Turkey have remarkable conditions for natural raisin production, and you can get the best raisin at the lowest price in these two countries. The US also has the advanced technology, with California leading the way in all US states. California is the only state that produces 20 percent of the world’s raisins.

Iranian raisin is a delicious dried fruit. It is used in the preparation process of a variety of foods, sweets, cookies, cakes and other confectionery ingredients. You might have eaten the most delicious birthday or homemade cakes using variety of raisins. This product is one of the prominent sources of income for the countries producing and growing grapes. Iran also has the best opportunities to produce all kinds of raisins for export. Some types of exported raisins have a dark brown color while others have a light color. You can make the most delicious recipes for special types of rice using a variety of pilaf raisins.

Iranian dried raisins as one of the strategic products of this country are made of reached grapes. Drying grape and producing raisin has a long history. Fertile agriculture, high quality lands, and the use of modern and organic technologies in Iranian raisins production has made this country as one of the largest exporters of this product, and thus Iranian raisins now have a proper position in the world. 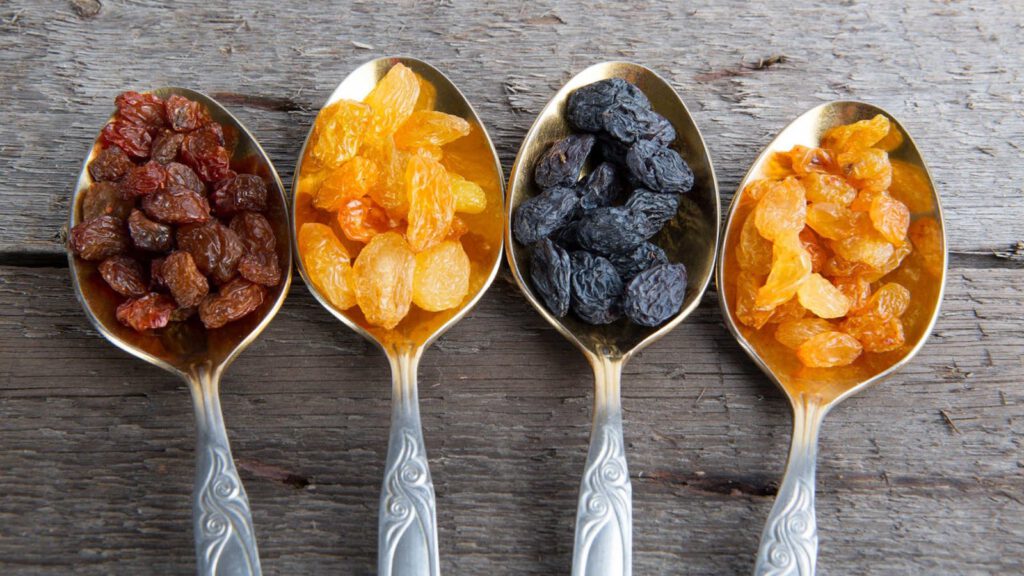 Buying, selling and exporting raisins as one of the important foods with therapeutic, medicinal and nutritional benefits for human health is one of the sources of income for the countries producing this nutrient. At present, raisins are one of the most important and main non-oil exports in the world, accounting for a significant percentage of the world’s exports in terms of revenue.

Iranian raisins have granted our country the third place in the world to export to other countries, followed by Turkey and the United States. As you know, raisins are the same as dried grapes, and in the Iranian market, all kinds of export raisins can be found depending on the type of grapes, the drying conditions and the additives. Also, due to the possibility of long-term storage of this product in dry and cool conditions, it is possible to buy and sell exported raisins during the year.

How to achieve the highest quality raisins for export?

The first thing you need to know about the quality of exported raisins is that the best type of raisin product is obtained by drying ripe grapes in the open air(under the sunshine or in the shade) and without adding any chemicals or sulfur so it’s good to get acquainted with the main cities producing raisins in Iran, how to prepare this product for export, the main purposes of sending export raisins and the types of raisins produced in our country.

Which cities in Iran are leading in terms of raisin production?

Production of raisins for export from different grape varieties has been done by farmers all over the country, and this product, in addition to being used in cooking, is also consumed with nuts.

The above cities have the highest ranks in terms of producing the best types of raisins in our country, however the best quality of raisins is attributed to the city of Malayer.

Export of raisins in Iran has a history of several hundred years, and our country ranks first in the world in terms of diversity and variety of exported raisins. In fact, pistachio, raisin and date exports make up the bulk of Iran’s dried fruit exports. Currently, more than 80% of raisin exports in the world are made in Iran, Turkey, the United States, Greece and Chile.

On the other hand, most of the world’s raisins are imported from the United Arab Emirates, Russia, Ukraine, Germany, Egypt, Canada, Pakistan, Turkey, Spain and Kuwait. It is also interesting to note that Turkey and the UAE, although which are present among the raisins producing and exporting countries, also import these goods.

Australia is also repackaging Iranian raisins and then shipping them to other regions with its own brands. Iran’s climatic conditions has made it one of the top rankings in horticulture, especially for grape cultivation and raisin production.

Germany, the United Arab Emirates and Australia are among the main importers of Iranian raisins, and Turkey, the United States and Greece are among Iran’s most important competitors in raisin exports.

Golden raisins are available in 3 grades A, AA, and AAA. These 3 degrees are for export to Europe. This rating is determined based on the approved European standard which is also implemented in Iran.  Premium golden raisins are those having only 1% crushed product per kilogram. If this percentage is maximum up to 2%, then the product will be ranked in the 1st place . In other words, if you see 1% of abnormal raisins in a 10 kg carton, you can accept it as a premium pack of product.

Most golden raisins have small sizing, but those with large sizing are exported to other countries. If you want to buy golden raisins, you can refer to the Fara Tose’e Jam as the export subsidiary of Sepahan Hamrah holding.

Even though many countries have started to dry grapes and produce raisins, Iran plays a vital role in producing and supplying the golden type. Our country has produced the highest quality type using global standards and makes it available to buyers. Fara Tose’e Jam having experience in supplying various Iranian raisins, including sun-dried, golden, and other types, can supply best quality Iranian raisins with best prices.

Golden raisin wholesale by this company, as one of the specialized golden raisins suppliers, is being done at the market price of Iran and the world. Many Iranian golden raisins are exported annually to many countries worldwide, including developed countries, Europe, Canada, the USA, North Africa, Arab countries, Malaysia, and Indonesia. On the other hand, Of course, countries such as Egypt, Morocco, Qatar, the UAE and Algeria are currently golden raisin importers.

Fara Tose’e Jam offers unique Iranian raisins, such as long green raisins, golden raisins, etc. It is interesting to know that many companies sell their products at the highest price as an exporting product.

Many golden raisins manufacturers in Iran offer this product in bulk with excellent and suitable quality and competitive price.

Our company guarantees sales and export quality of Iranian raisins. Raisins are a popular recipe ingredient in main course dishes, side dishes and desserts. If you’re a buyer for a restaurant, bakery or another type of food service, buying wholesale raisins is the most economical way to purchase the quantity of raisins necessary to meet your needs.