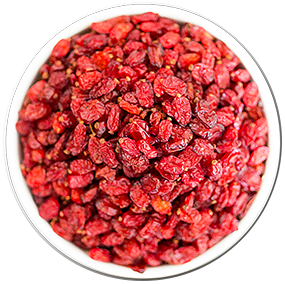 Barberry bushes have a sweet-sour flavor with a nice, pleasant taste that is often compared to some other berry family members such as cranberries. The dried barberry grows on the bush and is commonly used in Persian and Ottoman cooking within rice cuisines due to its beautiful jewel-like appearance and pleasant taste. This is also used to make sweet, tart jams and juices and a lot more other places. Barberries are long red berries that grow on barberry shrubs, which have branches covered in yellow flowers. Known as zereshk in Iran, barberries have long been part of traditional medicine. The small berries contain alkaloid berberine, which can cause adverse effects in large amounts.

Barberry can grow to be a fairly large shrub. The thorny shoots are found growing wild in Alborz mountains amplitudes and other parts of Iran. Ruby is the name given to seedless barberry which is cultivated in Qaenat and emerges from an erect shrub of 1.5-2 meters tall.

Barberry is a bush native to Europe, North Africa that now grows wild in many regions of North America. The berries of the barberry are traditionally used to make jams and jellies. But the herb also has a long history as a folk remedy for digestive disorders, including constipation, diarrhea, dyspepsia, heartburn, and loss of appetite.

It was traditionally thought to increase the flow of bile, which is why it was used for liver and gallbladder problems. It was also used topically to treat skin conditions like eczema, psoriasis, acne, and minor wounds.

European barberries have a tart flavor, similar to cranberries, while barberries from North America are sweeter. European barberries typically aren’t eaten raw without some kind of flavoring, since they can be intensely sour. When cooked or dried, the mellowed sourness of barberries complements everything from meat dishes to granola. 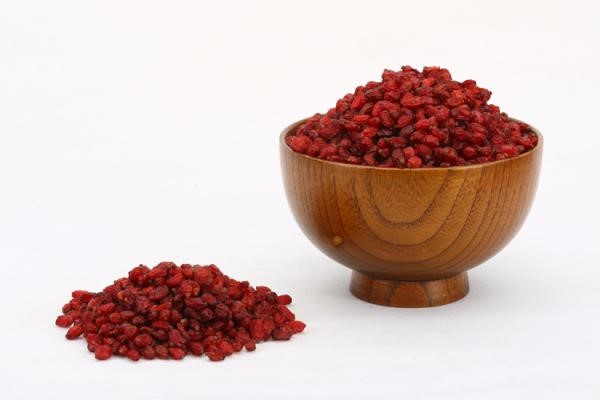 There are about 500 plants in the Burseraceae family, all of which produce a tart, edible berries. Some of the most common barberry plants include:

Sepcotrading company exports the best kind of Iranian dried fruits and nuts like barberries at the most affordable prices all around the world. Click the following button now.

Evidence for any health benefits from barberry is extremely weak, though there are studies of berberine that may apply to barberry. Any benefit from barberry likely relies on the fact that it contains berberine, for which medical uses are being established.

There is little scientific evidence supporting the medicinal use of barberry, but there is some evidence to support the use of berberine. Berberine is a chemical compound found in several plants, including barberry.

Berberine seems to slightly reduce blood sugar levels in people with diabetes. The results of one pilot study on 84 patients published in 2008 suggest that taking 500 mg of berberine two to three times a day for up to three months might control blood sugar as effectively as metformin, the first-line drug for type 2 diabetes.

In addition, berberine showed a favorable influence on cholesterol, unlike metformin, which has barely any effect. As the authors of a review article from 2015 noted, “with little documentation of adverse effects, berberine is positioned as a potential candidate drug to treat type 2 diabetes.”

Research suggests that berberine can lower blood sugar, improve cholesterol and triglyceride levels, reduce testosterone levels, and lower waist-to-hip ratio in women with PCOS, a hormonal disorder common among women of reproductive age. In some women with PCOS, the drug metformin is prescribed to prevent diabetes from developing (women with PCOS have been shown to have higher levels of insulin when compared to women of the same weight without the condition).

One of the most well-known uses for barberry was as an herb for treating diarrhea and dysentery, and research for this purpose goes back at least as far as the middle of the 20th century.

Barberries are a small berry that, in their dried form, are prominent in Persian cuisine. They resemble a currant or a dried cranberry, as you can see here. Barberries have a distinctive taste that starts sweet but ends on a very tart note.

What are the side effects of barberry?

People using normal and appropriate doses of barberry do not generally report side effects. Cases of nosebleeds and vomiting have been reported with extremely high doses of this herb. In infants, berberine (a constituent of barberry) may interfere with liver function and might worsen jaundice.

Berberine is a chemical found in several plants including European barberry, goldenseal, goldthread, greater celandine. Berberine is most commonly taken for diabetes, high levels of cholesterol or other fats in the blood and high blood pressure.

What are the benefits of berberine?

How much berberine should you take a day?

A common dosage recommendation is 500 mg, 3 times per day, half an hour before meals. Berberine may cause digestive side effects in some people.

What is the difference between berberis and barberry?

Berberis vulgaris, commonly known as barberry, is a shrub that grows tart, red berries. Its berries have been used in traditional medicine for centuries to treat digestive issues, infections, and skin conditions.

What is Berberis used for?

In Ayurveda, it is traditionally used to cure various infections of eye, ear and mouth, to lose weight, to heal wounds quickly, to cure piles and hemorrhoids, to treat dysentery, indigestion, uterine and vaginal disorders as well as to treat snake or Scorpion bite as an antidote.